Review:  Bloody Disgusting Selects takes us ‘cross the pond this time for a gritty supernatural thriller located amongst the slums of Scotland.  Ingenuity and creativity yet again reign supreme in Colm McCarthy’s tale of witchcraft and monsters, keeping with BD Select’s so far notoriously ambitious film selection.  Filled with highs and lows, Outcast both underwhelms and excites with rampant brutality splattered in between droll mystical plot points.  In terms of horror, McCarthy does bring a veracious beast to haunt viewers, mixing werewolf and deformed human into one ghastly creature worth mentioning to your genre loving fans.  But, ambition rarely comes without flaws, and Outcast by no means passes as unbeatable.  Even with all the hoodoo-voodoo boogeyman shadow haunting, Outcast remains rather predictable for a movie full of crazy rituals and conjured spells.  Scotland looks like a scary enough place filled with pushy real estate agents, dilapidated housing, and thuggish locals; but the addition of werebeasts delights on a lower level than expected.  Hunt or be hunted in this mystical thriller, but avoid setting off the wrong person; they might just be hiding a dark deadly secret.

In Outcast, mother and son Mary (Dickie) and Fergal (Bruton) belong to an ancient Celtic race fueled by magic.  Fergal is a unique boy, possessing an inner beast only set off by heightened fear or excitement.  For this reason Fergal spends most of his time around their new flat, avoiding contact with others and potential outbreaks of werewolf-itis.  So, of course new neighbor Petronella (Stanbridge) takes a liking to the young boy, and unknowingly instigates betraying his mother’s rules and risking unleashing Fergal’s secret.  The family’s special past comes with a consequence though, as others hunt their kind using counter spells in order to compete.  In this particular instance, Mary and Fergal are currently running from a man named Cathal (Nesbitt) who has been given powers comparable to Fergal’s.  If he can kill be boy by a certain time, Cathal receives great strength.  If not, he is stuck with only his weak mortal form.  Oh yeah, to thicken the plot, Cathal is Mary’s former lover.  And you thought your family had issues?  Thus sets off a violent struggle in this now poor Edinburgh arena, as innocent townsfolk start ending up dead.  But is it Fergal or Cathal doing the killing?  And can Cathal complete his wicked deed?

So many facial close-ups in this film…

As per the usual foreign horror flick, Colm doesn’t skip a beat with inclusion of all genre normalities.  Random rituals that obviously involve meaningless nudity?  Check.  Rough, almost indistinguishable dialects for us Americans to spin our heads around?  Check.  Bloody entrails stringing from unsuspecting youths?  Check.  And I mean none of that in a sarcastic way, but in a genuinely checklist fulfilling type of way.  I don’t mind the accents or seemingly forced craziness because that’s why I watch the genre and I know what to expect.  The quick talking Scotties make the film feel precise in attention to detail, keeping the atmosphere and locale factual…not to mention holding on to local charm.  As in Attack the Block, I’ll take geographic slang over American accents or subtitles any day.  Also relating to my comment on the French film The Pack, Colm and Tom McCarthy’s script strays from just being another werewolf slasher film with little explanation.  And I use the term werewolf loosely here as the creature generated is much less hairy and looks like a slimy rat almost, but for all intents and purposes the closest related horror movie monster is the werewolf.  But by introducing this whole back story of gypsies granting Cathal the power for a short period by painfully tattooing markings on his back in preparation for the hunt, it gives both creatures a rhyme and reason for inhabiting that tiny town and gives meaning to the inevitable slayings.  Coming from a lover of horror, it’s much more fun when an actual story with deadly implications is penned instead of unleashing a creature at random.

But with that said, I’m not sure all the Celtic back culture and spell casting was majorly interesting for the full duration of Outcast.  Just as Colm followed horror’s golden rules, he also falls prey to clichéd filmmaking just like almost every other director.  Cathal is supposed to possess the power of transformation and is shown doing so every night while he tears about locals for pleasure, yet when he reaches the point of killing off Fergal…he stays human?  Fully knowing the monster he can possibly face, he stays in his fragile fleshy form?  Fail on the prospect of some werebeast on werebeast cage match action.  And while heartfelt, the ending can also be predicted a mile away, but honestly had less of a negative effect based on the relationship built between both characters involved.  I wasn’t lost on fantastical intricacies or bored to tears by any means, but I couldn’t get past some of the more situation permitting instances only occurring so Fergal could escape or someone could die.  In this respect, Outcast is just more typical horror, all be it with a fairy tale twist.

So, in conclusion, it has to suck to be Fergal.  Imagine if every time you tried to get some, an inner beast was unleashed hell-bent on killing everyone around it?  Awkward for you, might scare off your partner, but talk about a mood killer?  As far as horror fans looking for some extra spice in their typically bland broth, Outcast may just be that secret ingredient you’re looking for.  At the least, it’s something different.  Just know Outcast is a regional horror submission, so be ready for a Scottish overload.  For me, I wasn’t overwhelmed by beauty or originality, but a decent one-off genre watch none the less.  I’ll certainly keep going with Bloody Disgusting Selects as I love the direction a film like Outcast takes, and hope for only more insanity from here. 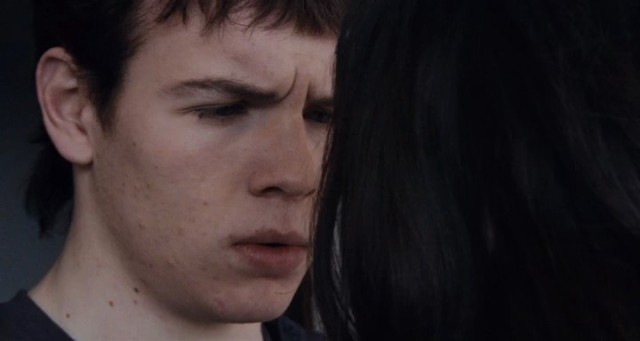 We get it, people have faces…