So week in and week out I vent my nerdy complaints about how the beloved “Walking Dead” TV show lacks mightily Kirkman’s comic passion.  Plot hole this and mistreatment that, feel my wrath!  Dale’s failed character, the weak Shane kill, a slow ramp up leading to a dull first 6 episodes: Season 2 had definitive lows.  But, in drastic fashion the season finale has converted into a complete believer, by doing everything right.  I complained too much time was spent not paying attention to the comic origins?  The season finale jam packs a billion references to keep us comic purists drooling.  The lack of zombie kills keeps horror junkies seeing red?  The finale ramps up the action to unseen levels.  Hell, “Beside They Dying Fire” even brings up moments forgot about (Jenner’s secret) and thrusts them back into relevance.  Season 1 was lackluster, Season 2 was a slow improvement, but Season 3…could Season 3 be the final culmination uniting show and illustrated fans alike?  I hope so, because Season 2 blew the Season 1 finale out of the water, conjuring non-existant anticipation Season 2’s lead in missed.   In other words, let’s go.

Alright, if you’re reading this, you care about “The Walking Dead” and have undoubtably seen the Season 2 finale by now.  So, with that said, a full recap isn’t really needed.  After Shane’s second death by gunshot, a herd of walkers are drawn to the farm.  Rick and Carl, caught in the undead group, make a bee line for Hershel’s barn while the others prepare for war at the house.  In a flurry of destructive chaos, a few stick out moments happen: Rick and Carl set the barn on fire in order to kill and distract zombies (symbolizing the end of Hershel’s farm), Jimmy is eaten in the RV, Patricia is snagged while running to the car, and Andrea is left alone by the group (presumed dead).  The remaining survivors meet on the highway where supplies were left for Sophia, putting the Greene farm behind once and for all.
Andrea, all alone, wanders through the woods with zombies surrounding her every move.   She battles her way ferociously through the walkers, but runs out of ammo and is left to use hand to hand combat.  Working for a while, the constant activity becomes too strenuous, and it looks like her time is finally up as a walker wrestlers her to the ground.   At the last-minute though, a sword severs the zombie’s head from its once connected body, and a mysterious cloaked woman with two armless zombies chained like pets appears as her savior.  Andrea has a friend!
Back with the group, Rick reveals at the CDC Jenner whispered the belief that all people are infected, and even with a non zombie induced death people still reanimate as walkers.   Then, to Lori, Rick reveals the details of Shane’s death, visibly upsetting his wife.  At night, group members discuss amongst themselves splitting from Rick and testing their chances alone.  Rick explodes, challenging any one of the doubters to leave, not standing in their way.  No one walks out though, and Rick takes charge as dominant leader.  As the camera pans out, we see a large gated jail, prime for our survivors to inhabit.  On to Season 3!

Recently I’ve been starting these segments with a whiney fanboy rant (sorry!), but “Beside The Dying Fire” is granted exemption from such a fate, satisfying my every need.  For me, the comic enthusiast, getting that nostalgic feeling of watching a drawn panel come to life lets me relive that joyous intrigue and excitement from my first exposure to the material, and granting that same wave of emotions all over again.  Ending the episode is a promising shot of a secure jailhouse hinting a new living situation for our survivors,  but that exact shot was ripped right from the graphic adaptation.  I remember the anxious feeling, closing that volume to tear right into another, engrossed by the possibility of safe living.  That same chord is struck seeing my beloved jail teased for Season 3, and the mouth-watering anticipation of the events to come.  Similarly, just knowing the solid fact that Michonne will join our cast in Season 3 makes my little fanboy heart beat twice as fast, as Michonne is easily one of the most pivotal characters in the comic.  Andrea’s strong female instincts will be put to shame by the cloaked warrior, drawing intrigue from her zombie followers.  I can only fathom how Michonne will be adapted to the show, and only pray the writer’s surpass my expectations.  Here’s your redemption for shafting Dale “Walking Dead,” do this character right.  Now all we need is Tyreese to bring his ass kicking and join with Rick, beefing up security.  Rumors have circled his part has been cast, but we can’t believe a word until his face appears on-screen.  For now, I’m more than happy with Michonne’s addition and will take what I can get.  P.S.- For those of you show n00bs who don’t know Michonne’s background in the comics, I leave you with the immortal words of Ray Arnold (Samuel L. Jackson) from Jurassic Park: “Hold onto your butts!”

Now, there were some no brainers entering this episode, but some surprises as well.  Just as predicted last week, the less prominent characters were used as nothing but zombie fodder.  Goodbye Jimmy and Patricia, your deaths were more memorable than your actual characters.  But look at this, Hershel made it out alive!  I have to admit, his survival threw me for a loop as I was convinced Captain Greene was going down with his ship (farm), but it’s nice to see Scott Wilson staying around as Hershel for at least a few more episodes.  His conflicting preacher vs. secret badass personality begs for more developing.  Did you see him mowing down zombies via almighty boomstick?  Hershel has some more demons that need to come out, and Season 3 seems like a good time to open the flood gates.  Beth also gets to live another day, I guess because we already had a child death in Sophia this season.  But on the topic of surprise survivors, may I ask how T-Dawg is still around?  Honestly, no character has defied the odds with greater success, shocked he even made it out of Season 1.  In terms of the show, T-Dawg is just…there.  Whenever a random task needs to get done, there’s good old T-Dawg, but the same was said for Jimmy and Patricia.  Fight on brother, but c’mon, this charade seriously can’t last.  As for the other characters, like I said, too many other high-profile deaths had occurred rather recently, so someone like Daryl or even Carol were safe.  But predictions and surprises aside, “Beside The Dying Fire” was an assault of intensity, making said moments enjoyable none the less.  Where other episodes failed in obvious delivery, I never felt cheated for once.

“Beside The Dying Fire” was a set up episode for things to come and nothing more, yet does so much right in comparison to earlier episodes.  Best episode yet even?  Not for long I’m hoping as the jail tease brings so much speculation to a comic fan.  But with Season 2 officially in the books, how does it stack up so far?  Depends which part we look at, given the mid-season break.  Part 1 was somewhat of a snooze-fest, utilizing minimal zombie interaction and spending most of the time healing Carl or searching for Sophia.  The writers fell prey to the same dialogue run ons and slacked attention to detail Season 1 haters always pointed to.  Our world was shaken when undead Sophia shambles out of the barn, but looking back killing her also symbolized killing the weaker half of Season 2 in a undeserving blaze of glory.  With that shot we saw a new Rick, new problems, new fears, and also new solutions.  Post break we jump right into the action by witnessing a bar shoot out, the Randall situation, and more enraged Shane very early in Part 2.  You could see characters evolving at an alarming rate, and disaster was in sight.  And we were right.  Part 2 climaxed rather nicely, only sputtering for an episode in the middle, but a steady climbing of pace built for some of the best work yet on the show incorporating major deaths and information bombshells, ending with the epic fleeing of Hershel’s farm.  Part 1 and Part 2 were comparable in the sense that Part 1 learned nothing from Season 1 and suffered from it, yet Part 2 brought the thunder early and became a separate entity.  Watching “The Talking Dead” made me feel a tad better about Season 3 as well because Kirkman himself nodded at this notion, promising Season 3 would continue along the same path of heightened alarm.  Hopefully Part 2 plays right into Season 3 and feels more like an extension, just as Part 1 is much better off being lumped in with the clunky Season 1. 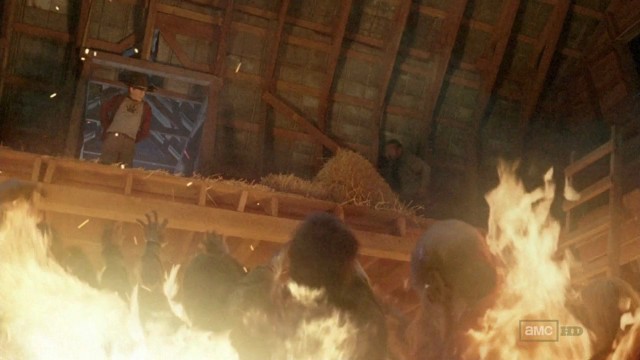 So we trudge on, another season past but time always advancing.  If nothing, I do feel a stronger bond to the remaining survivors, but for those who have passed, not a whole bunch of remorse.  With “The Walking Dead” I continue looking forward, waiting for a full season of horror lovin’.  Could Season 3 be it?  After hitting a few hurdles out of the gate, enough constant momentum has been built up for “The Walking Dead” to break out in a full sprint.  The jail represents a new fresh start, be it characters or story.  Dale was flawed and dull, and sadly was dealt with as such.   Out of death I’m hoping life is born, accepting someone like Michonne into the fold and blowing us away.  And oh yeah, we get the emergence of The Governor along with a the return of Merle Dixon!  (Both Confirmed)  As if having one apocalypse brainwashed dictator wasn’t enough, but Rick’s old enemy will appear simultaneously?  C’mon, that’s plenty promise right there for some good vs. evil battlefield type action, amidst the lumbering flesh eaters threatening survivors every day.  Oh, we can now mix that with the bleak realization a zombie life awaits every one of our still living members as per Jenner’s discovery, so we can add a dash of hopelessness to our characters already battered mentality.  For those non-readers, spoilage of jailhouse details and what await will be kept in because there’s no way to tell how the show’s writers will deal with existing material, but be assured between that and Woodbury is some of the best “Walking Dead” reading (exactly what the show is pointing towards).  As Glen Mazzara and Robert Kirkman coined, bring on the “Ricktatorship”  Is it October yet?

I love all things film. I'll watch any genre, any actor, at any time. This whole film critic thing is a passionate hobby for now which I'm balancing with working in the business world, but hey, someday, who knows?
View all posts by Matt Donato →
This entry was posted in TV and tagged Horror, TV Shows, Zombie. Bookmark the permalink.