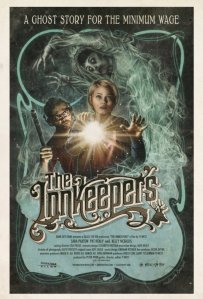 Review: “A ghost story for the minimum wage”…created with minimum effort.  I take that back, Ti West always knows what he’s doing, but sometimes his visions just don’t come together.  The Innkeepers feels much like West said to a buddy “Hey, what if a ghost haunted a hotel…isn’t that genius?!”  With bated breath, the friend would probably prod “Yeah?  And?”…to which West would respond “…It’s about a ghost…who haunts a hotel!”  And there you have The Innkeepers!  Thanks for coming out, hope you enjoyed the review.  Ok, maybe a little brash on my initial reaction, but I expected something more spooky from West this time around, as his latest effort seems rather tame.  The House of the Devil was a sleeper hit for West, created with that 80’s horror nostalgia feel that sent us on a trip to the VHS glory years.  He then followed with the sh$t-tastic Cabin Fever 2: Spring Fever, which was even able to set back Eli Roth’s low-budget infection masterpiece.  Suffice it to say, The Innkeepers did not help West’s stock in any way, but certainly didn’t scare up memories reminiscent to his worse attempt.  Well, this time, he didn’t scare up much of anything…

The Innkeepers chronicles the closing of a colonial themed hotel called The Yankee Peddler.  Claire (Paxton) and Luke (Healy) are the lone workers left during the Peddler’s last weekend, but they hope to take advantage of the empty hotel to capture proof a spirit haunts our aged landmark.  Luke thinks paranormal proof will ensure some type of fame or attraction, yet doesn’t have enough evidence to make his findings public.  But when a beloved actress (McGillis) reveals her psychic hobby, Claire sees an opportunity to finally come in contact with the ghost of Madeline O’Malley.  Will her encounter be a friendly one?  Or will Claire wish she left the past hidden, leaving the legend as nothing but a mystery?

So, there are pros to The Innkeepers.  Ti West has a fantastic sense of style, and his main strength is storytelling.  Honestly, as a director, West made this ghost story loads more interesting than it should have been.  The Yankee Peddler had a creepy Disney Haunted Mansion feel as the camera floated down the hallways, waiting for an undead inhabitant to pop out from a room.  West always kept the haunted feel, even when attempting to lighten the mood with goofy gags and story moving scenes.  Sara Paxton and Pat Healy had enough chemistry for a leading couple, bringing a sci-fi nerdiness to the paranormal obsessed characters.  Paxton took care of the spunk, charisma, and genuine fear as main character Claire.  Her reactions were always on par, never under or over reacting to a situation, which sometimes happens in contemporary horror.  If she got freaked, Claire did what any normal person would, get the hell out of there.  Piano starts playing itself?  No thank you!  I should probably leave this room and find the other living bodies in the house.  Healy on the other hand was more of a sidekick, good for a laugh every time he’d disappear off-screen for a duration.  In terms of delivery, Claire and Luke were enjoyable enough to keep me chugging.

Where I had the most qualms with The Innkeeper was in the story though.  Comparing it to other haunted house films, West’s script was all bark and no bite, leaving us in the dark even after the film ends.  Scare wise, there was an attention grabber or two, but nothing that lasts.  Yes, the atmosphere was consistently tense, but West never takes advantage of it.  For far too long Claire and Luke build up the impending supernatural climax with nothing but idle chatter, and then in a flash the film goes from “Oh sh*t, strap in, here we go!” to “Wait, that’s IT?”  We’re left with an empty hunger after wading slowly through the typical signs showing the house is in fact haunted, but the payoff is nowhere near worth the time invested before hand.  West also could have done a much more in-depth job building up the mythology behind Madeline O’Malley, as we just accept she died in the house and haunts it.  Ok, I get the minimalist effort trying to be accomplished, but it feels forced and cheap just having her there…because.  We barely even saw any supernatural interactions whether it was Claire, Luke, or the psychic, again waiting for that final scene to actually get a jolt of excitement (only to die moments later).  In a haunted house film where a supposed vengeful ghost roams the halls, the only noise breaking the night silence just turns out to be the chatty hotel attendants rambling about the occurrences that could happen.  Personally, I didn’t find the humor all that amusing either, as Wests story drags along at a dreadfully boring pace half the time.  Like I said…all bark…no bite.

I appreciate West’s love for retro horror, where the actual terror was based on story and not gross outs.  This era produced such silly yet entertaining haunted flicks like Poltergeist, but The Innkeepers just lacked the charm of such films.  Screen time for our apparition was minimal, the back story lacked explanation yet was dragged out for 95% of the film, and the finale was every bit was disappointing as the time it took to actually build some horror elements.  House of the Devil was slow-burn throwback horror done right, as there were juicy tidbits to hold you over until the bonkers climax.  Here, West tries to replicate the same feel, but with none of the cream filling and a much duller climax.  Well, honestly, not much of a climax at all.  Just a bitter conclusion.  His focus on simplicity actually hurt The Innkeepers after all was said and done, leaving us with another forgettable tale of things that go bump in the night.  Ignoring Cabin Fever 2, we’ll call this Ti’s sophomore slump.

Not much money in the ghost hotel business….

2 Responses to The Innkeepers