So out of all my reviews, I give the horror genre the most of my love.  Can’t say why, but I attribute it to the fact that when I was a little Nato, horror movies terrified me.  If it was scary in any fashion, I was bailing hardcore.  But now years later, here I am seeking out that one film capable of irking me beyond rational thought.  As I curled up paranoid in my bed, head tucked securely under blanket after watching Paranormal Activity, it wasn’t a bad thing anymore.  That feeling was more of an accomplishment now, elated I found a film so well done it couldn’t exit my brain.  So with that, I’m devoting an entire list just to the beauty of horror.  Be sure the failures will follow as well though; that’s the fun part.

10) Scream 4 (Wes Craven)
I’m not sure where all the hate for Scream 4 stemming from.  Sure, it’s not the best horror movie of all time, but for the fourth installment into a franchise that last graced the screen 11 years ago, Scream 4 is pretty damn entertaining.  Craven and writer Kevin Williamson are back to the same “re-writing the rules of horror” with a playful script, displayed in the opening scene that rips apart endless franchises (don’t speak too soon though Scream).  Kills, twists, turns, and more Ghostface.  This is one of those films where you just enjoy the ride… 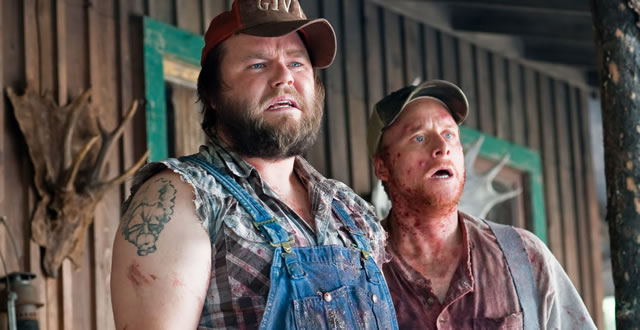 9) Tucker & Dale vs. Evil (Eli Craig)
A horror comedy done right.  What if the psycho rednecks in the woods were just misunderstood, and the pretty college kids were actually just idiots?  That’s what Craig’s film asked, and hilariously explained. Tudyk and Labine are an entertaining duo, really getting deep into the oblivious nature of their characters.  Tons of fun to be had, plus some of the most memorable kills of 2011.  The perfect combo.

8) A Lonely Place To Die (Julian Gilbey)
Doesn’t get much more desolate than being alone on a life threatening rock face with no safety.  Gilbey’s thriller uses great shots to depict our actors as tiny specs on a towering wall, getting them lost in nature.  It’s that hopelessness which sets the mood of A Lonely Place To Die, but then the slasher aspect comes in as our characters have to battle both a treacherous trail and evil kidnappers.  Melissa George rocks a strong female lead, fighting for her life against insurmountable odds while conveying the horror of her situation.  Try and get me to go rock climbing after this, I dare you…

7) The Woman (Lucky McKee)
So what happens when you decide to domesticate a feral, cannibalistic woman?  Eh, nothing positive…for our characters that is.  McKee’s The Woman incited much commotion at Sundance, offending some viewers into a rant filled state (look the video up on YouTube) that ultimately was used for publicity.  What the ranter forgot is in the horror community, creating something so repugnant is looked upon as a compliment of sorts, causing real genre fans into an obligated watch.  Well, those who ventured in were treated to a wonderfully out of the box story, delivering horror in all the places you’d never expect based on the plot blurb thrown around.  Pollyanna McIntosh gives an organic performance as the animalistic woman in question, but Sean Bridgers also deserves recognition for his twisted performance as father Chris Cleek.  Both make The Woman one of the more interesting horror watches of the year, and number 7 on my list!

6) Stake Land (Jim Mickle)
What?!  Vampires can be scary!?  Stake Land was built with every intention to bring some type of horror back into the fairly unpopular Vampire genre.  Mickle made sure his vampires were grotesque and monster like, differentiating from the glowing pretty-boys adored by tweens.  Nick Damici (pictured above) who stars as mentor character Mister also helped write the script, proving to be a bona fide double threat for this horror film. Essentially the Zombieland movie of the vampiric genre, minus the comedy, a lot of comparisons can be drawn between both scripts, but only at face value.  Same “old vet trains young kid in killing ways”, same “find the not infected zone being rumored about”, but thank god the details are different.  Stake Land brings in religious cults, interactions with safe zones, and some horrific gooey gore, giving a fantastic middle finger to the Twilight series.

5) TrollHunter (Andre Ovredal)
A first person camera film about Norwegian troll folklore.  Sounds farfetched, but what an adventure.  The whole handheld camera movement is being overused like crazy now, but the foreign takes possess loads more creativity.  [REC] made Diary of the Dead look like an uninspired student film, and TrollHunter is made with that same distinctive magic.  Filled with tons of Norwegian culture, this is a Jurassic Park type creature flick, putting puny humans in perspective with these gigantic, lumbering, grumpy old trolls via fantastic effects work, making TrollHunter a hands down winner.

4) Dream Home (Ho-Cheung Pang)
What would you do for your dream apartment?  Kill the surrounding tenants to drive the cost down?  Desperate times…  Seriously though, Pang’s uber-violent story is full of huge moments for horror fans.  Gruesome kills, a punishing female killer, a strange look into Chinese male/female relationship culture, and a barrage of visual gross-outs give Dream Home a heap of personality.  Not to be mistaken for the throw-away Daniel Craig horror debacle Dream House either.

3) Insidious (James Wan)
Whoa, hold the phone, original horror that’s both scary and creative?  Yes, Wan also created Dead Silence, but we’ll ignore that.  Insidious proves that remakes are not the answer for true horror fans, and ambition is a good thing.  True, for every Insidious there are 10 equally ambitious failures, but I’ll watch Apollo 18 ten times if that means I get one viewing of Insidious.

2) I Saw The Devil (Jee-woon Kim)
It’s in my top 10 of the year, no crap it’s in my top 10 horror films too.  Check my Best of 2011 list and the review for a real analysis.  The horror is on a more psychological level, revealing how deranged and barbarous each man is, but delivers again some viciously delicious kills and rattling gore.  Not for the faint of heart.

1) Attack The Block (Joe Cornish)
Again, my favorite film of the year.  More of an adventure of sorts, but when the aliens start biting back, one cannot deny the horror elements.  Ten times more brutal than expected given the young age of the boys, but thankful of every second.  I dug this fun-filled dream film, leaving the theater with a smile stretching cheek to cheek.

Man, this is some brutal stuff, but creative and detailed as well.  The video above is just a small sampling of the off-the-wall violence implemented in Pang’s crazy vision, teasing you with some dangling entrails.  Promise me when I say “you ain’t seen nothing yet.”
Bonus! Funniest Death Scene:
Tucker & Dale vs. Evil Stupid college kids kill themselves off

Poor Tucker and Dale just wanted a weekend away from their ho-hum daily lives.  Too bad some college kids ruin their vacation with such pesterings as the wood-chipper incident above.  Most the kills are on par with the humor displayed, each one just as creative as the next.  Craig gets a major pat on the back for a gut-busting mix of comedy and horror.

Biggest Surprise:
Final Destination 5  (Steven Quale)
Kudos to the fifth installment of the Final Destination franchise for ignoring the last few attempts and breathing life into this reusable plot.  Honestly, I was close to throwing a kill or two from Quale’s effort into the Best Death Scene crowning, earning at least an honorable mention.  Early on, a gymnastic death created a quick wince reaction along with a jolt of energy, something Final Destination has been missing as of late.  Hey, at least we get some hope for a series of movies I doubt are going anywhere despite numerous denials.

Well?
A good year for horror, not the best, but a very appeasing year none the less.  What we got were a lot of genre films, but again the foreign efforts exuded much more creativity and drive for something different.
Attack the Block: UK
I Saw The Devil: South Korea
Dream Home: Hong Kong
TrollHunter: Norway
Tucker & Dale vs. Evil: Canada
A Lonely Place To Die: Scotland
Right there, four of the top five films on this list were foreign, barring the exceptional Insidious.  In 2012, I would love to see Hollywood get some more influence in my top 5, getting some more home country influence into the genre.  You better believe all of these will make my DVD collection at some point though, granting me my scare fix for 2011.

I love all things film. I'll watch any genre, any actor, at any time. This whole film critic thing is a passionate hobby for now which I'm balancing with working in the business world, but hey, someday, who knows?
View all posts by Matt Donato →
This entry was posted in Best Of Lists and tagged Horror. Bookmark the permalink.