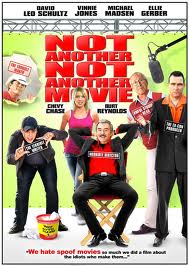 Rating:  So now we’re spoofing our spoof movies?  Meet The Spartans wasn’t bad enough, so now we have to make fun of movies that make fun of other movies?!  (Yo dawg, so I hear you like spoof movies in your spoof movies.  Meme humor, don’t judge me)  We’ll, actually, that doesn’t sound like that bad of a concept since I detest quick money grabbers written by “I don’t care how many of the writers from Scary Movie.”  But where Not Another Not Another Movie falters is, well, everywhere.  A satirical attempt is made to portray why such mind-numbing recycled spoof films are made, but these writer’s spoof is 10x worse than any other original spoof film.  Following the near bankrupt Sunshine Studios, the plot centers around some bumbling baboons who work there and attempt to save the production company with a spoof movie.  That’s the plot.  First off, shame on the actual actors in this film that lent their name.  Reynolds and Madsen have literally one scene in the film, while Chase and Jones have about 2 or 3 appearances each.  The rest of the cast are a bunch of brutally un-funny and uninspired over-actors with cartoonish and fake personalities, that challenge your patience in every way.  The real chore is watching these characters and taking them serious, while not turning the film off on account of everything done wrong.  The comedy is cheap and easy, writing childish and safe, characters annoying and unlikable, and final packaging basically unwatchable.  The most enraging and frustrating point is you can tell just how bad the movie is based on the first 5 minutes, and keep watching in hopes there’s just one beacon of hope that shines through and makes the whole awful experience worth it.  Then it ends.  Inadvertently, Not Another Not Another Movie tricks us into watching exactly what the film claims it isn’t, just another piss poor spoof film attempting to cash in on a recent trend.  Hate spoof films just like me?  Then avoid this pile of dog sh*t with no redeeming values relating to entertaining cinema.  I want my hour and a half of my life back.

I love all things film. I'll watch any genre, any actor, at any time. This whole film critic thing is a passionate hobby for now which I'm balancing with working in the business world, but hey, someday, who knows?
View all posts by Matt Donato →
This entry was posted in Nato's Netflix Watch Instantly Journal and tagged Burt Reynolds, Chevy Chase, Comedy, Michael Madsen, Vinnie Jones. Bookmark the permalink.