Born from the mind of Spencer Susser, Joseph Gordon-Levitt becomes some kind of white-trash sensei in this dramatic indie comedy titled after Gordon-Levitt’s character. Making waves at festivals like Sundance in 2010, Hesher is you typical indie character piece that introduces a over-the-top character type into a strange situation.  Hesher himself is no more a plot point than he is a major character, but Gordon-Levitt gives quite the convincing transformation.  Looking at him as the sleek, slick, and Wall Street-esque Arthur in Inception, and then the gangly and unkempt metal head Hesher; you can’t possibly find any two characters on different sides to the personality spectrum.  Gordon-Levitt plays them both oh so well though, and Hesher is one of those characters that sticks with you long after the film.  He’s not an over-used cliché or empty character, and rightfully deserves having his name as the title.

Young T.J. (Devin Brochu) is coping with the loss of his mother, dealing with his depressed father, and fighting off bullies at the local school.  One day, while T.J. is trying to release some energy, he stupidly throws a rock, breaking the window of a house being built.  What T.J. though was just some harmless vandalism would soon turn into a life changing event though.  After the glass shatters, out walks a homeless looking squatter who grabs T.J. and pulls him in the house.  A local rent-a-cop shows up, the squatter is force to flee, and T.J. goes about his day.  But just as T.J. thinks he’s seen the last of this sickly looking vagabond, he forces himself in T.J.’s house on the rational that since T.J. messed up his last place of residence, he now has the right to squat in his house.  We learn that his name is Hesher (Gordon-Levitt), and he’s nothing but a free-spirited, loner, metal-head with no ambition.  At first, having the strange man living in the house, T.J.’s family doesn’t know what to expect.  But as their own problems being to surface, Hesher starts to get involved.  The new problem becomes, can this drifter offer actual words of wisdom worth any weight?  Or will Hesher over stay his welcome in this broken household.

Being the hardcore Metallica metal head, I would have loved if they worked in Hesher’s reaction to St. Anger…

As stated, Hesher is an incredibly indie film that uses obscure characters and extreme situations to try to deliver a deep message from off the beaten path.  The interesting part of Hesher though is the surprising lack of Gordon-Levitt and Portman, instead focusing on youngster Devin Brochu.  Those expecting some kind of Gordon-Levitt/Portman  fueled indie romance or something along those lines, because they are the big names in the film, should know both actors are simply players, not the total focus.  The story really follows how T.J. deals with the loss of his mother, so a lot of it is told from his point of view.  The dynamic between T.J. and Hesher is obviously a strange one, be it the age difference or uncertainty, but Hesher’s unique style of teaching brought so much more out of the character.  Even with Hesher in the picture though, the film still managed to work on an emotional level that reveals just how broken T.J.’s home was.  You could invest in the poor child’s troubles with his dad, school, or love life.  This was also the catalyst that made Hesher an anti-hero character you actually wanted to root for, while he secretly tries to save T.J. from himself.

But, even if the story centers around T.J., Hesher is still the most enjoyable part of the film.  Susser himself did a nice job bringing a ton of little creative quirks to the character of Hesher that embodied the character’s persona.  Hesher’s “intro music” that would chime in during moments when the character would first appear in a room couldn’t have been more perfect.  Metallica’s “The Shortest Straw” is only a song most die hards would know, coming off of their early album “…And Justice For All,” but fit Hesher perfectly. Besides being a really deep into riff, it was a song before Metallica became more “mainstream,” and coincides with Hesher’s “don’t give a shit” attitude, because that’s what Metallica stood for at that time.  The crude hand drawn tattoos were also a meaningful touch, speaking to Hesher’s loner style and minimalist view on life. Everything was done with a reason or intention, be it obvious or not.  Nothing could have been accomplished without Gordon-Levitt’s brilliant performance though, understanding the almost childish nature of this grungy nomad.  I do believe this was one of Gordon-Levitt’s better roles of his career, depth wise being much deeper than simply appearance, yet cracking us up by doing something as simple as farting at the most inopportune of moments.

Portman and Wilson also grace us with their presence, both having their niche in the film. It’s funny to see the production try to hide Portman’s blatant sexiness behind some baggy clothes and big rimmed glasses.  She plays a spunky misfit girl who becomes the apple of T.J.’s eyes, despite their great age difference.  Of course Hesher plays into this dynamic, creating only more problems for T.J.  Wilson on the other hand plays T.J.’s depressed father, trying to cope with being a single parent now.  As Wilson does so well, we get sucked into just how meaningless he now believes his life is, and how that impacts those around him.  Sadly, these characters fall into they typical indie stereotype, but the actors at least bring integrity to their roles.

So to sum up the story of Hesher, you can walk away feeling some kind of emotional response to the lovable loser.  For me, I was fascinated by the character from scene one because his intense love for that era of metal is shared by yours truly.  I actually started playing”The Shortest Straw” when I started writing, and have been letting Metallica run straight down my iTunes.  But in many ways, the band’s early work reflects Hesher directly, and I thought Susser did a fantastic job tying the music into the film.  As far as indie flicks go this year, Hesher will soundly sit amongst the top, recklessly charming us using its head-banger with a heart of gold. 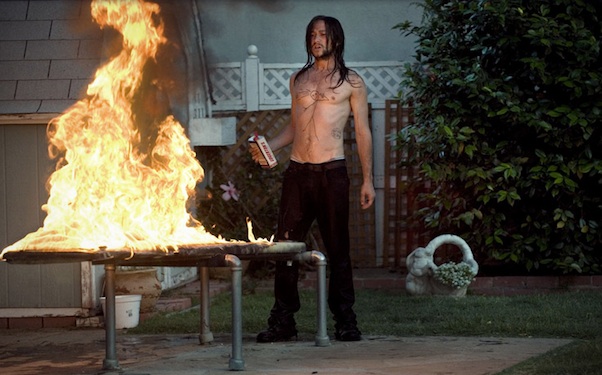 I love all things film. I'll watch any genre, any actor, at any time. This whole film critic thing is a passionate hobby for now which I'm balancing with working in the business world, but hey, someday, who knows?
View all posts by Matt Donato →
This entry was posted in Reviews and tagged Drama, Joseph Gordon-Levitt, Natalie Portman, Rainn Wilson. Bookmark the permalink.