Review:  Power.  127 Hours is full of pure power.  After my viewing of the film, I was filled with so much raw emotion I choked up a bit.  Aron Ralston defied all odds and gave Death the finger.  His story needed to be told on the big screen, and Danny Boyle couldn’t have done a more perfect job than if he was actually there filming Ralston’s real escape.  The film is an inspiration to all, showing the relentlessness of human determination and the drive of the human spirit.  You have no right to complain about your life after watching Aron Ralston endure 127 hours of physical pain and suffering, going farther than many would have in his situation.  Dying seemed like the only option for Aron, but he managed to somehow garner an insane energy supply to push him through the unthinkable.  Merely reading Ralston’s book is not enough because you can’t properly grasp just how gruesome of a task he was forced to complete.  Watching this movie will give you a new appreciation for life, along with a newfound sense of just how far only a mere man, just like me or you, can push himself.  Nothing is stronger than our will to survive, and Boyle portrays that in the most stunningly moving tale possible.  I’m assuming you all heard the news of this story and know how it ends, but in case you don’t there will be spoilers below.

127 Hours is the story of local mountain climber Aron Ralston (Franco) and his fight for survival.  While on a routine expedition across Blue John mountain, things take what appears to be deadly turn for the worst.  After helping two female climbers named Kristi (Mara) and Megan (Tamblyn) find a hidden body of water in some caverns, he sets out on his own to do some climbing.  While working his way through a narrow crevasse, a rock dislodges, sending him plummeting down only to have the rock pin his arm against the wall near the bottom.  His hand is smashed, leaving an ominous blood stain on the wall, and Aron is left to somehow find a way out of his jam before all his supplies are used up. Talk about a rock and a hard place. (OHH ZING)  The name of the film comes from the amount of time he spend lodged between the rock and the wall, leading up to his grand finale of pain.  Aron displays superior survival skill to last as long as he did, and the whole time he keeps his video camera handy to record messages to his family in the case of the worst happening.  But when it gets down to Aron’s final stand, his last resort involves an extremely dull multi-tool and a mouth tightened tourniquet.  In a matter of life and death, could you make the tough decision Aron was faced to?  Or just give up, trapped by the rock, waiting for your time to run out. 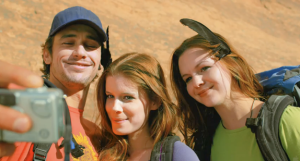 And to think how his day started…

The majority of the film takes place while Aron is trapped, so obviously the film relies heavily on Franco’s performance, which he nails.  Franco brings this crazy charismatic energy to Rolston mixed with the seriousness and despair of the situation.  He goes from lovably awkward and full of energy while he’s with Kristi and Megan, to a delusional motivation for the rest of the film.  You can just feel the desperation being emitted from Franco in both his actions and emotions.  All this while staying in one spot of course. Franco had to rely heavily on his facial expressions to convey the proper emotions because he was trapped in such a tight space.  For example, if he was mad, he didn’t have the luxury of throwing things angrily or any other clichéd actions.  He had to show us using only speech and facial expressions exactly what he was feeling, yet he always found some new way to display the desired emotion.  So far this year no man deserves the Best Male Actor more than he does, given the difficulty of the character he was given.

Boyle also brilliantly crafted a script that wasn’t just Aron Ralston trapped by a rock. Boyle’s writing guides you through Aron’s life; taking you back to his childhood or reliving memories of his ex-girlfriend as he daydreams.  But Aron is always looking in on the scenario, instead of actually living it.  For example, while reliving a moment of his childhood in his old house, you see Aron outside of the house watching himself as a child. He isn’t actually living it, but thinking about what he has to lose.  It establishes more than just a fight for survival, but almost a shot at redemption for Aron.  These scenes connect you on more of an emotional level with Aron, instead of only on a level of recognizing the danger Aron faces.  Not to mention Boyle is always varying his shots an angles, mimicking the frantic emotions of Aron.  He also cleverly uses the video camera Ralston has to offer yet another angle on the situation, and a way for Aron to have some dialogue while being the only character on-screen.

Now the part that I’m sure everyone is wondering: how is the final scene shot where Aron is forced to cut off his own arm?  It was tasteful yet brutal, painful yet relieving, primal yet uplifting.  I’ve seen unspeakably grotesque visuals in horror films with no reaction, but watching Aron cut through his arm had me cringing and squirming with every second. Franco’s acting was full of this crazed emotion as he flip-flops between pain and relief, that was enough to create an extremely uplifting scene while striking directly to your core.

Danny Boyle created a Best Picture winner in Slumdog Millionaire, and still found a way to top himself this year.  127 Hours was a spectacular human drama that told the story of how a young man defied all possible odds for survival.  It was chock full of raw emotion, brilliant acting, and a powerful and inspiring story that proved to all there is no limit to what we can do.

Final Rating: 9.5 pestering insects out of 10

I love all things film. I'll watch any genre, any actor, at any time. This whole film critic thing is a passionate hobby for now which I'm balancing with working in the business world, but hey, someday, who knows?
View all posts by Matt Donato →
This entry was posted in Reviews and tagged Drama, James Franco, Kate Mara, True Story. Bookmark the permalink.