Review:  Now I know what you’re thinking, why the hell do we need another vampire movie?  And no, there is no connection between this and that atrocity they passed as a movie, Vampires Suck.  You haven’t heard of Suck because it’s a Canadian film that was never released this side of the border, but Suck does anything but that.  Written and directed by the lead actor Rob Stefaniuk, the movie is just as much a commentary on the whole rock star lifestyle than it is your typical clichéd vampire shitfest.  It’s fun to recognized all the famous musicians that pop up along the film, and Stefaniuk also works in numerous famous CD covers into shots for the film.  You can really sense Stefaniuk’s passion for music in this film, and it translates positively onto the screen.  The film oozes passion and care, in a way that only a talented writer/director/lead character can pull off.  Being a vampire in a rock band never looked to enticing.

Suck tells the struggle of a small time rock band called The Winners.  Joey (Stefaniuk) is the leader of the misfits, doing anything he can to further the band.  But when bassist Jennifer (Paré) comes back from a night of partying, Joey suspects something isn’t right. In fact, as the band gruesomely finds out, she has been transformed into a vampire. At first Joey’s angry with the situation, but the anger turns into intriguing potential when fans react positively to Jennifer’s new look.  But with the new lifestyle comes new problems, mainly feeding related.  With great power, comes great responsibility.  But Joey has to decide if fame and fortune is worth the undead price.  Sales are up, popularity is soaring, but the thirst for blood is ever-increasing.  We watch as The Winners sacrifice their mortal lives for immortal rock stardom, only to find out being a vampire isn’t all glitz and glamour. 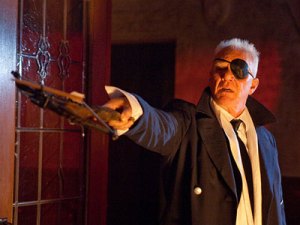 This was a high concept film, with a lot of its success based upon the script and execution. With so many films cashing in on the vampire craze, it was going to take more than just the lure of the undead to make an entertaining film.  It was going to need some kind of unique twist or some kind of different edge to spice up the material.  That’s where all the musical humor and rock ‘n roll elements play a huge role in the film.  The vampire jokes take a back seat at times even, which is refreshing in the sense that the film isn’t being driven by the vampire concept.  Oh yea, it also helped that vampires aren’t portrayed as whiney bitches that sparkle in the sunlight.

I must say, it had some very awkward pacing though.  Suck spends a good portion of the movie building up to its logical culmination, then in a heartbeat the entire tone of the movie changes.  Imagine if Batman just got bored after a while and decided he didn’t want to fight crime with no explanation.  He gives his whole shpeel about being a protector of the night, wins over Gotham City, and just decides one morning he’s done with it and throws the costume away.  That situation is comparable to what happens here.  It is extremely abrupt and creates multiple questions concerning the previous back story.  But then all is forgiven when you remember it’s a movie about a freakin’ vampire rock band. Does there need to be much logic involved?

Where the movie excels is in witty dialogue, comical songs that describe the plot as it’s happening, and Hugo (Ratz): the lovable foreign roadie.  The film even borders on being a rock opera in a few instances, where the cast will just break out into song unrelated to the band.  But as I said, the script is well written and the characters are all interesting. The reactions by the cast as the vampire problem comes to light are hilarious, especially by poor innocent Hugo.  The broken english speaking foreigner is the band’s lone roadie who is the first one to discover Jennifer’s deadly secret.  She uses Hugo to help cover up her tracks, but the lies start taking a toll on Hugo…in many side-splitting ways.  Also, I give Suck props for staying musically accurate.  Too many times I see a fake band in a film, only to watch them mimic playing their instrument horribly.  Be it a drummer who plays a snare when you clearly hear a cymbal, or a guitarist who strums chords when we hear a solo being played; as a musician it’s easy to spot miscues and seriously makes the movie lose authenticity. Thankfully, all the music is tight and well written and the actors either know their instruments or are brilliant con-artists.

On the downside, I felt like Malcolm McDowell was actually trying to act horribly.  Every time he was on-screen he acted like he was purposely hamming it up, which only would have made sense if the rest of the characters did it.  Sure, Suck was B movie to a degree, but McDowell was the only actor making it feel like one.  He’s usually fantastic, but maybe playing vampire hunter Eddie Van Helsing wasn’t a role he was meant for.

So far, in 2010, Suck is one of my stumbled upon favorites that not enough people will hear about or see.  It’s the story of a struggling band, but told in a way no one has ever dared to yet.  It’s got gore, vampires, killer jams, and unsuspected cameos sure to keep any music lover guessing.  It also destroys the notion that vampires are giant pussies, and instead ferocious creatures of the night who can also rock out.  Stefaniuk shows a lot of promise by using certain stylistic maneuvers that end up looking fantastic given the low-budget of the film.  Call them tricks of the trade, but he ingeniously uses visuals clearly meant to save money, and are seamlessly integrated into the film that never stops the flow of the movie.  There is a ton to love here, from both a horror and a comedy genre sense.  In the end, Suck is an extremely fun movie that really rocks and rolls.  Who says Canadians never do anything for us?

Co-Founder of the Certified Forgotten Universe. Editor, Podcaster, Writer, and pretty rad dude. Don't feed him after midnight, but beers are encouraged. Twitter/Instagram/Letterboxd: @DoNatoBomb.
View all posts by Matt Donato →
This entry was posted in Reviews and tagged Comedy, Horror, Vampires. Bookmark the permalink.