Review:  Another day, another comic book movie.  Banding together older actors, RED promised to give us an action filled ride involving retirees instead of young guns.  So it was only befitting that they sign director Robert Schwentke, whose directorial credits include Flightplan and The Time Travler’s Wife…right?  Cue thoughts of another sub-par attempt to bring a comic book to life.  But, the cast itself warranted a viewing, including such big names as Willis, Freeman, Malkovich, and Mirren.  Surely with such veteran actors, RED could be successful even with Uwe Boll directing.  Right?  Right?  See, you’re thinking I’m about to say how RED was lacking just like every other comic book film with an ambitious director and some big names attached.  But in reality, this film was a total winner.  For once, we received the proper combination of star power and source material that created a seriously entertaining action/comedy that could make the comic creator proud.

In RED, Frank Moses (Willis) is a retired CIA agent trying to deal life after assassinations.  Bored with all the free time he has, Frank spends most his time doing the same routine day after day, including calling CIA phone operator Sarah (Parker), whom he has developed an attraction to.  All that changes when a hit squad invades his house late one night, and he is force to flee.  He picks up Sarah along the way because whoever is after him is also targeting her, and the two have to infiltrate the CIA in order to figure out why there is a bounty on both their heads.  But they can’t do it alone.  Frank has to contact members of his old team for help, and also to warn them of the danger they may also face.  Between Joe (Freeman), Marvin (Malkovich), Victora (Mirren), and Ivan (Cox), they have enough experience to take over third world countries.  But can they uncover the hidden secrets of the agency they used to work for?  The gang has to infiltrate the belly of the beast if they want their lives back, a feat that proves to be far from easy.

The real A team….

Don’t be fooled by the beginning of the film, for it starts out at a tad bit of a slow pace.  It won’t last the whole film, but I found myself sitting through about he first 20 minutes or so watching an extremely average film.  That is, until Frank, Marvin, and Sarah are fleeing the airport.  Frank shoots a grenade launcher at a henchman, and blows him into a bajillion piece with a comically extravagant explosion.  From then on, it’s like a roller coaster rocketing forward after a steadily slow buildup.  The beginning is that sluggish period where the coaster is crawling towards the top of that first gigantic fall that builds all the momentum.  Then, it stops at the top, and there’s that moment before the drop where time stops for a split second.  But then BOOM, the rest of the ride is an adrenaline pumping ordeal that never stops until the end.  Well, consider the exploding henchman the BOOM that starts the intensity, and just like a coaster RED never lets up until the very end.

Kudos to casting also, because John Malkovich was perfect for Marvin.  He was absolutely hilarious and plays the typical whack job perfectly.  Watching him ramble about government conspiracies and run around with a fake bomb strapped to his chest were some of the greatest parts of the movie.  Bruce Willis is the cool, calm, and collected hardened killer.  Morgan Freeman is the suave and intelligent brainiac of the group.  Helen Mirren is the sophisticated and innocent female killer who you would never suspect.  Every character has their place.  But without John Malkovich, the group would be seriously lacking entertainment and humor, which only a veteran actor like him could properly deliver.  But while I’m on the topic of the actors, true or false Dame Helen Mirren is still a total fox.  At the ripe old age of 64, she still possesses the beauty and grace she blessed the screen with from an early age.  Then give her a gun?  The situation has all the makings of a hilariously looking and strangely attractive character whom you have an extremely hard time believing is an assassin, until she gets on a mounted machine gun and tears apart security guards…any my heart.

What actually surprised me most was the action delivered by usual drama director Schwentke.  The explosions as I said were very over the top and comic booky if you will.  For that matter, all the action was.  It was also very stylized, shown in the trailer by the shot of Bruce Willis effortlessly walking out of a spinning cop car with gun in hand.  Possible?  No, he would turn into human road  kill in real life.  But in a comic book world?  Probably a normal occurrence.  But it isn’t too ridiculous where there are corny sound effects and single bullets causing nuclear explosions.  Schwentke found an even balance between comic and reality, which suits the audience perfectly.

RED is much more than a bunch of old farts with guns running around killing government agents.  It’s a comedic and action packed film about a bunch of retired killers not only feeling how good it is to work again, but fighting for their own lives.  Schwentke proves to be adept in directing not only dramas, but action films as well.  In fact, I’d much rather see him keep with more films of this nature than create another Flightplan.  His sense of reality mixed with his knowledge of the source material proved to be a successful investment, bringing RED off the page and onto the big screen.  There’s plenty of star power to drive this film,  but it never becomes overwhelming.  It’s a solid movie worth all of your time, even if it’s only to see the charmingly crazy John Malkovich.

Final Rating: 7.5 seniors with weapons out of 10 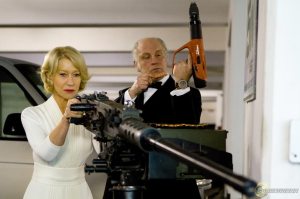