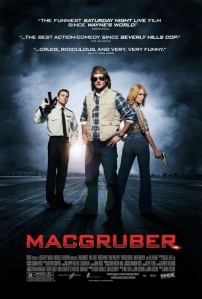 Review:  As soon as you mention the phrase “SNL movie,” eyes roll and interest is lost.  After a series of duds, it’s interesting to wonder who thought the world needed another movie based off a skit from SNL.  But somebody did.  And the man known only by the name MacGruber got the upgrade from a 3-minute skit to a feature-length film.  If you know anything about the sketches, they are essentially a rip off of the old TV show “MacGyver” where the lead character could always get out of a tough spot by creating some device out of completely random items he found in his area.  MacGruber is the anti MacGyver, and one way or another he manages to screw up defusing the bomb and every skit ends with the inevitable explosion.  So how do you turn that into a movie?  Well, first write a script that makes it seem like SNL hired a room full of pre-pubescent boys who just discovered potty humor.  Then, find a random actor who probably has nothing better going on to play the main villain, in this case Val Kilmer.  Then, re-write the script with as many variations of curse words as possible and voila!  You have MacGruber!  This was easily one the most immature and juvenile films I have seen.  Pretty much all of the jokes are dirty in some way, and so bad that numerous people walked out of the theater on this film because they simply couldn’t take it.  The level of intelligence that went into this film is too ridiculous to even think about, and everyone is sure to be offended in some way or another by something MacGruber will eventually say.  Oh yea…AND IT WAS F#%KING HILARIOUS!

When criminal mastermind Dieter Von Cunth (Kilmer) gets his hands on a nuclear warhead, the American government has no choice but to reinstate an agent so top-secret he only has one name.  MacGruber (Forte).  A mysterious soldier with a laundry list of accomplishments, his specialties include being able to make a device to get out of any situation and ripping throats.  He’s a man who doesn’t believe in guns and whose sexuality is always in suspect.  Originally he has no intention to join the efforts of the government, but when he learns Von Cunth is behind it he sees a chance at revenge against the man who killed his wife.  So he assembles a team of “American Heroes” (hilarious cameos), but after that doesn’t work out has to settle for the help of rookie Lt. Dixon Piper (Phillippe) whom he can’t stand and old friend Vicki St. Elmo (Wiig).  It’s up to the new team to stop Von Cunth and give MacGruber the piece of mind he so desperately needs.  Thankfully for us MacGruber is actually terrible at what he does and we get to watch every hilarious minute of it, except for his fantastic distraction technique involving a stalk of celery that seems to work perfectly.  But is still hilarious. 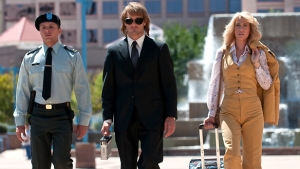 As far as film-making aspects go, there is no defending MacGruber.  The story is paper-thin and the movie relies solely on the jokes.  And yes, there are some flat parts in MacGruber where the jokes are just so moronic they can’t even draw a laugh.  There’s lowbrow humor, and then there is “let’s see how much we can get away with” humor.  Yes, naming a character Dieter Von Cunth is funny the first couple of catch phrases in (Time to pound some Cunth!).  But when it’s the end of the movie and you’re still trying to point out “Hey his last name sounds like a bad word! That’s funny!” it just comes off lazy and cheap.  And the writers are certainly better than that based on some of the other jokes that literally had me crying (MacGruber’s surprise in the control room? Two of the funniest sex scenes I have ever seen?).  There were also some hilarious recurring jokes that the film had, so not all overkill was bad.  I get the whole point of the movie was the dumbed down and simple humor, but the film does suffer from some overkill with jokes like Cunth.  Also, when the film wasn’t funny it just felt like it was dragging on at a snail’s pace.  When the movie was good, it had my crying in the theater.  But when it was bad, it below average bad.

A huge positive part of the film was the acting of Will Forte, who is the master of distorted faces and insane reactions.  Whether it be MacGruber’s “Oh Sh!t” face or his vein popping angry face, Forte is the only person who could pull those kinds of laughs with visual physical humor.  But don’t forget Forte’s SNL counterpart Kristen Wiig.  She is easily one of the funniest women in show business at this time and her comedic timing is unmatched.  Sure she’s had better roles, but the fact that someone else could shine in MacGruber is enough to warrant praise.  She has such simple lines like when she’s tied up on Von Cunth’s boat, but she delivers them in such a clueless and airy way it adds a whole other level of hilarity to the dialogue.  Phillippe himself isn’t a real source of comedy till the end, but his character serves as fodder for MacGruber and his slew of foul insults.  The same goes for Kilmer.  He doesn’t have an earth shattering comedic performance and serves better as a target for MacGruber’s humor.  But when they are all rolled into one, we get a satisfying concoction of humor, with Forte leading the way.

MacGruber is hands down some of the dumbest comedy I’ve ever seen attempted.  This is as lowbrow as it gets.  Be prepared for a barrage of cussing, inappropriate comments, and jokes involving genitalia of both the male and female.  If you can’t take that kind of humor, MacGruber is not a movie you should be watching.  If you’re a fan of the skits though, be prepared to see your favorite bumbling agent in a full-scale adventure giving him the freedom only an R rating can.  Will Forte is the real star here, giving MacGruber the perfect combination of emotional outbursts, dimwitted one-liners, and lack of any common sense at all that makes him comedic gold.  What were the best parts of the film? Any time Forte was on-screen.  What were the worst parts of the films? The rest.  This film is more like a test to see how much stupidity one person can take in a film, and trust me some people couldn’t and won’t be able to survive the whole thing.  Which is totally understandable because this kind of humor is very touchy person to person.   But, I can assure you, people will find this hilarious because it is.  Will I argue against anyone claiming the movie is too dumb to be good?  No.  But to anyone who enjoys mindless comedy and enough potty humor to make a movie like American Pie blush, MacGruber is right up your alley.  Use my tears as evidence.  There will be parts during this movie that will make you lose all control of your laughter, and those moments will make MacGruber well worth the watch.

Final Rating: 7 too many Cunth jokes out of 10 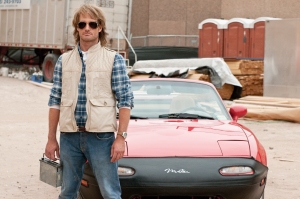 The Miada and the portable car stereo say it all…

I love all things film. I'll watch any genre, any actor, at any time. This whole film critic thing is a passionate hobby for now which I'm balancing with working in the business world, but hey, someday, who knows?
View all posts by Matt Donato →
This entry was posted in Reviews and tagged Comedy, Kristen Wiig, Ryan Phillippe, Val Kilmer, Will Forte. Bookmark the permalink.