Review:  You know you’re in trouble when a director is using Hitch as his claim to fame, which is why I was less than enthused about the movie I had to tackle this week.  I unluckily got stuck with The Bounty Hunter and if there’s one genre of film I avoid the most, it would be romantic comedies.  No matter how many I see or how hard I try, they usually never impress me (except for a few shining examples such as Love Actually). They all follow the same generic format and offer nothing new to the genre, instead just taking the same plot and using it over and over again in different situations.  The Bounty Hunter is a perfect example of the latter, offering nothing interesting for the viewer except a plot that could be concocted in anyone’s sleep without an ounce of effort.

The story follows the usual plot of ex-lovers brought back together by chance, and are then given time to remind themselves what their relationship used to be.  In this case, Milo Boyd (Butler) is a bounty hunter and his ex-wife Nicole Hurley (Aniston) is a reporter who just skipped her bail hearing after being accused of “assaulting an officer.”  A bounty is put on Hurley and of course Milo jumps at the chance for a big payday and the satisfaction of bringing his ex-wife to jail.  Tracking her down is the easy part Milo finds, as she continuously gives him the slip every chance she can including using a tazer when Milo isn’t paying attention.  But when Nicole finds out she’s in over her head not only with the law but a drug dealer too (related to a story she got in too deep with), the couple find themselves on the run fighting for their lives. The question is though, can the couple grow closer together while running farther away from trouble? Don’t get excited, you won’t feel any sense of danger or action because the love story is the focus here.  And being a romantic comedy, of course the duo have to find random places they went together (like where they got married) and do things that remind themselves of how life used to be and blah blah blah…I don’t even have to spoil anything because you know what happens.

The best way to prove my point on how much of a failure the movie was can be done by dissecting each of the genres it was supposed to encompass.  Well, first it was supposed to be romantic. Now there’s realistic romantic, where the film doesn’t get caught up in how women want to see me act on-screen and vice versa, and the love can be related to real life situations.  And then there’s Hollywood romance, where you want to vomit because the characters always say the right thing and always do the most mushy-lovey-dovey-over the top actions reality just doesn’t involve.  And worse of all it is completely predictable.  So predictable to the point that my girlfriend was making puking noises and groaning at every cheesy line because they were just that clichéd and hard to swallow.  And don’t forget the happy ending we can all watch and think to ourselves “Awe everyone is happy and life is perfect.”  Please, if life was really like that people wouldn’t have to go watch movies like this because they’d be living it.  But anyway, I think you can guess which style The Bounty Hunter used.  It just wasn’t believable relationship from a realistic perspective, and I honestly felt no connection between either lead character.  It was exactly like watching two big Hollywood actors being paid to pretend to be in love and was in no way a well-told love story between two real people.  The film lacked having any aspects that invested you in the characters or the story.  And then the comedy title the film claims to have? I can honestly say I think I laughed once or twice, the rest of the jokes being completely safe and flat or in other words, everything we’ve seen before.  I mean I wasn’t expecting Anchorman laughs, but come on if you can’t make me laugh more than three times (and this coming from someone who found more laughs in the freakin’ Alive and the Chipmunks remake), than you sir have no right putting the label of comedy on this film.  Let’s try renaming its genres with something more appropriate like “The Same Hollywood Love Story You’ve Seen A Million Times.” Yeah that sounds about right.

Next, I’d really like to address Gerard Butler because in all honesty I love him as an actor. He’s charming, witty, has a badass accent, and has the chance to be a huge action star like in 300.  But with all those qualities, he sadly also fits in pretty much every romantic comedy, and studios appear to cast him in every single one they can.  (The rest of this paragraph is going to be in open letter form)  So I ask, why must you keep taking these roles?  I loved you in 300 and you gave me so much hope. Yes, you’ve done numerous films before that (Tomb Raider/The Phantom of the Opera/Reign of Fire), but 300 was where I first was convinced of your greatness.  Next came P.S. I Love You, and it wasn’t a complete wash but let’s just say it made me anticipate you next film even more.  You followed with Nim’s Island, and now I was waiting for that next big action role even more than before, which is where RocknRolla came in. You being cast in a Guy Ritchie film made me ecstatic, and I loved every minute of it.  Gerard Butler was back I convinced myself.  But oh how I was wrong.  What followed was The Ugly Truth, Gamer, Law Abiding Citizen, and of course The Bounty Hunter.  I can’t blame you for Gamer and Law Abiding Citizen because I’m sure they sounded great on paper, but on the screen came across more lackluster than anything.  They weren’t your fault though which is why they can be forgiven.  But The Ugly Truth and this film?  You’re better than that, and it pains me to see your name anywhere near such films that should be taken to a giant incinerator for abysmal romantic comedies and be destroyed so no one else can be subjected to their horrors.  I truly believe you can be that next big action hero Hollywood needs, none since the likes of Arnold or Sly, but to do that you have to start leaving the romantics behind.  Leave them for the less fortunate actors that can’t do better.  McConaughey seems to be taking his fair share, just pass them to him!  You don’t need these!  Please return to 300 form and continue kicking Hollywood’s ass in a way only your sweet accent can.  Sincerely, this guy.

I honestly don’t want to discuss this movie any more in that I have nothing left to say.  The story was basically copied and pasted from numerous romantic comedies into a New Jersey setting, I didn’t care that Aniston and Butler were in it because even their star power couldn’t carry the film, it had every romantic cliché imaginable, and it wasn’t the least bit funny.  I have to admit my expectations were pretty low for this movie, but The Bounty Hunter was even talented enough to surpass the lowest of expectations.  I guess that’s something to note right?  Bravo The Bounty Hunter, you were worse than I ever thought was imaginable.  I would rather watch The Room set on repeat for an entire day than sit through this movie again, and if you don’t understand that comparison I highly suggest you research The Room and see just how much weight that sentence holds.  Oh, but kudos to Jennifer Aniston for still keeping her insanely good looks, it made the movie minutely bearable for the male population that were forced to sit through it.

Final Rating: 2 big name actors in a trash movie out of 10 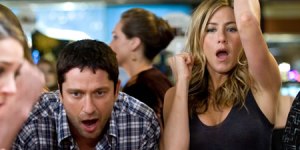 I love all things film. I'll watch any genre, any actor, at any time. This whole film critic thing is a passionate hobby for now which I'm balancing with working in the business world, but hey, someday, who knows?
View all posts by Matt Donato →
This entry was posted in Reviews and tagged Comedy, Gerard Butler, Jason Sudeikis, Jennifer Aniston, Romance. Bookmark the permalink.

1 Response to The Bounty Hunter